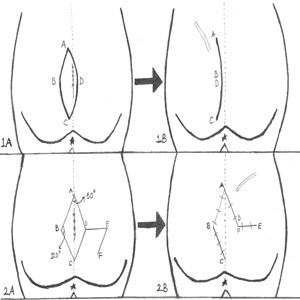 The ideal treatment for pilonidal sinus disease would have a short hospital stay, low primary wound failure rate, low recurrence rate and restore quality of life. Current evidence suggests a flattened natal cleft with a lateral scar satisfies at least two of these. One way of achieving this is with a rhomboid transposition flap.

Limberg flap (1946) is suitable to close a rhomboid defect with angles of 60⁰ and 120⁰. The short diagonal is extended by its own length and an incision parallel to one of the sides completes the flap. The defect can be considered as two equilateral triangles. As such, the distance between any two points on the design is the same as the short diagonal. Whether the lower part of the Limberg flap incision is lateralized by 1cm or 2cm may not be important.

Dufourmentel flap (1962) is used to close a rhombus defect composed of two isosceles triangles. For practical purposes, the flap takes off at an angle of 150⁰ to one side of the defect.

Tardu A, Haslak A, Ozcinar B, Başak F. Comparison of Limberg and Dufourmentel flap in surgical treatment of pilonidal sinus disease. Turkish Journal of Surgery (2011), 27(1), 35-40.